Skip to content
As if our phones didn’t have enough information about us already, Paul Eremenko of Google’s Project Ara announced at a conference recently that it won’t be too long before your phone will be capable of saving your life.
One of the attachments was a snap-on pulse oximeter which allows the phone to measure oxygen saturation levels in the blood. This is actually pretty big because it basically puts a medical device right in your pocket. It could be used by physicians on the go, EMTs, and so on, especially if they need to get a quick read and don’t have the necessary equipment on them. The purpose of the Ara project is to use a touch sensor on the phone to obtain detailed health statistics from the user. Eremenko specifically mentioned blood oxygen content. While a phone equipped with a pulse oximeter is certainly impressive, it appears that it is only the beginning of what Google has planned for the future combining health and technology.
The vision of the Ara project is for users and doctors to be able to communicate up to date medical information that is stored on the patient’s smartphone. The data could range anywhere from vital signs, to a patient’s diet and exercise routine.
With the variety of mobile apps these days, it is about time that all of the data obtained from diet and fitness applications can now be consolidated into a useful form. The particular Google project to accomplish this is still a little ways out though. The company says consumers should be looking for an official announcement regarding the product coming early on in 2015.
For now, we’ll just need to keep going to the doctor the old fashioned way.

A great article below posting about technology advances and Oxygen.

posted on March 15, 2014 (Len Rosen, The Futurist, 2014)
On to the topic of the moment, a new smart app device developed at the University of British Columbia in Vancouver, Canada. But first a little background. Ever heard of a pulse oximeter? If familiar with hospitalizations then you probably have seen one in action. If not then think of the movie ET, and the alien’s glowing finger and maybe that will strike a chord with your.
When ET’s finger pulsed red it was a sign that he was alive and well. Steven Spielberg probably got the idea for this from seeing pulse oximeters at work. With my daughter’s heart disease I became very familiar with this important indicator of wellness.
Pulse oximeters measure oxygen saturation in the blood. They do this by taking advantage of the light absorptive capability of hemoglobin. When attached to a finger the device tracks blood from each pulse or heartbeat as it passes by the light sensor. A pulse oximeter houses an infrared and red light generator, a light detector and a microprocessor. The greater amount of infrared light absorbed by the light detector the higher the oxygen saturation reading. On room air a reading in the high 90s is most desirable. Lower readings indicate compromised airways, pneumonia, heart disease and many other medical conditions one of which is preeclampsia, a condition that causes high blood pressure during pregnancy and often can lead to death for the mother and infant if not detected early.
Pulse oximeters are readily available in Developed World hospitals but not so much in the Developing World. Hence a group of scientists at the University of British Columbia came up with an alternative. With funding from the Canadian government and private investors they developed what they are calling the Phone Oximeter, a $40 device that takes pulse oximetry out of the hospital and makes medical-grade diagnostics possible anywhere. A standard medical sensor connects to the audio port of virtually any mobile device. It can be used with tablets, laptops and smartphones.
With preeclampsia killing 76,000 pregnant woman every year and more than 500,000 unborn or newborn children, and with 99% of these deaths occurring in the Developing World the Phone Oximeter is about to begin medical trials targeting 80,000 pregnant women in India, Pakistan, Mozambique and Nigeria. 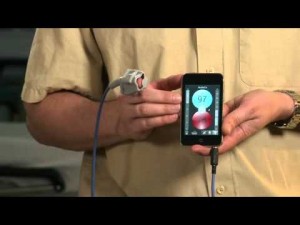